The KJV; Nostalgia or New Life? 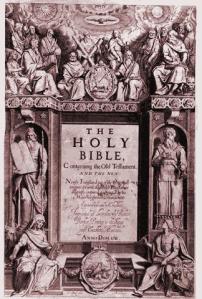 All year we have been Celebrating the KJV here in Cambridge and I have given a number of sermons and written a number of blog posts and articles on the specifics of the translation. However as the year has continued I have had a gradual sense of unease about the way it is being celebrated, at least here in England. It seems to be touted more and more as a cultural artefact, a piece of marketable heritage, a source book of common phrases, a decorative back ground to literature, but never as sacred, challenging, or life-changing. The whole year seems to have been about manner not matter, about style not substance, as though we could honour and praise a book without ever considering its actual content!  Finally I decided that I wanted to say something publicly about this misgiving, and to outline, by way of contrast, what the original translators were working to achieve, and I have done so in the sermon I post below. The core of what I have to say is an exposition of four beautiful images from Miles Smith’s prefaratory letter in which he set out very clearly what the translators of the KJV thought their translation was for. So I give that passage from the Preface here, followed by the audio of my sermon, you can either click on the ‘play’ button if it appears in your browser, or on the link in the title of the sermon. The audio lasts for 25 minutes.

“Translation it is that openeth the window, to let in the light; that breaketh the shell, that we may eat the kernel; that putteth aside the curtain, that we may look into the most Holy place; that removeth the cover of the well, that we may come by the water, even as Jacob rolled away the stone from the mouth of the well, by which means the flocks of Laban were watered [Gen 29:10]. Indeed without translation into the vulgar tongue, the unlearned are but like children at Jacob’s well (which is deep) [John 4:11] without a bucket or something to draw with; or as that person mentioned by Isaiah, to whom when a sealed book was delivered, with this motion, “Read this, I pray thee,” he was fain to make his answer “I cannot for it is sealed”

4 responses to “The KJV; Nostalgia or New Life?”