Transmutations; an act of thanksgiving 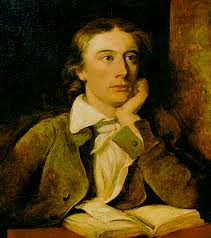 Sometimes a poet, or even a single poem, can save your life. It can take you the way you are, in a place of darkness, loss or lostness, and, without changing anything, transmute everything, make everything available to you new, having ‘suffered a sea-change/ into something rich and strange. Thats how it was for me when I first encountered Keats, in my mid-teens,  a very dark period of my life. This poem, written in the Spenserian Stanzas he used so effectively, is an account of how he changed things for me, and in its own way an act of testimony and thanksgiving. It is set on the Spanish Steps and in the house there where Keats spent the last months of his life. It was there, in the room where he died, that I first read the sonnet Bright Star, written into the fly leaf of his Shakespeare.

You can hear me read this poem by clicking on the title or the ‘play’ button.

The sun strikes gold along the Spanish steps,

Patches of god-light where the tourists stray.

The old house is in shadow and still keeps

It’s treasures from the searching light of day.

I found it once, when I had lost my way,

Depressed and restless, sheltering from rain,

Long years ago in Rome. But from that day

Everything turned to gold, even my pain,

Reading the words of one who feared he wrote in vain.

I too was ‘half in love with ease-full death’,

But standing by the window, near his bed,

I almost heard the ‘tender-taken breath’

On which his words were forming. As I read

I felt things shifting in me, an old dread

Was somehow being brought to harmony

Taught by his music as the music fled

To sing at last, as by some alchemy

Despair itself was lifted into poetry

I spent that summer there and came each day

To read and breathe and let his life unfold

In mine. Little by little, made my way

Finding that in his story mine was told;

Bereavements, doubts and longings, all were there

Somehow transmuted in the poem’s old

Enduring crucible, that furnace where

Now with the sun I come on pilgrimage

To find this house and climb the foot-worn stair,

For I have lived to more than twice his age

And year-by-year his words have helped me bear

The black weight of my breathing, to repair

An always-breaking heart. Somehow he keeps

His watch on me from somewhere, that bright star…

So, with the words of one who mined the depths,

I sing and strike for gold along the Spanish steps. 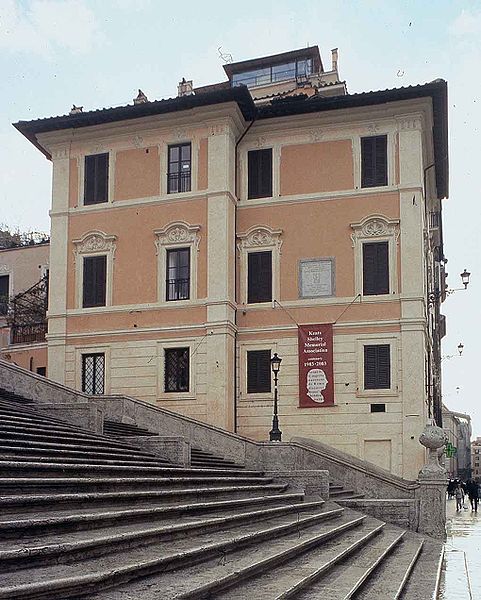 The house where Keats died, by the Spanish Steps, now a memorial, museum and library