Hear, Read, Mark, Learn, and Inwardly Digest! These five glorious verbs, deepening as they follow one another in intensity of engagement, come altogether in one of the most justly famous collects in The Book of Common Prayer; the collect for this coming Sunday; the second in Advent. Here’s the whole collect:

BLESSED Lord, who hast caused all holy Scriptures to be written for our learning; Grant that we may in such wise hear them, read, mark, learn, and inwardly digest them, that by patience and comfort of thy holy Word, we may embrace, and ever hold fast, the blessed hope of everlasting life, which thou hast given us in our Saviour Jesus Christ. Amen.

This is surely ne of the best, and most Biblically rooted prayers about reading the bible ever! here is a brief reflection on each of these petitions followed by a Sonnet for the Second Sunday in Advent:

When it comes to our reception of scripture this collect starts where most people, at the time of its composition would start; with hearing! Most people weren’t literate, and though the reformers had made sure a Bible ‘in a language understanded of the people’ was set in every church, most people had to hear it read aloud by someone else, and of course the King Jmes Translation was made to be read aloud and not a verse of it was passed until it’s phrasing had stood the test of being read aloud, until it was something sonorous and memorable.

But of course we go on from hearing to reading, as so many of those first auditors did, for the translation of the Bible into English was the single greatest spur to the growth of literacy in the English-speaking world and Bible translation remains to day one of he great drivers of literacy and education with all the good that follows.

But we cannot rest with reading, we must learn to mark. Mark here means more than simply ‘pay attention’. It means to make a mark, not only in the outward sense of marking up or underlining and annotation of passages, but inwardly to mark, to let the scriptures themselves underscore in us those passages which are marked out by God to make their particular mark in us. We all know such passages, the ones that, in a given reading seemed to have been marked out for us particularly.

Marking, and being marked in turn, is of course the beginning of learning. Now learning by rote, done by itself for no reason probably does no good, but learning by heart can sometimes be a pathway to learning in and through the heart. I will never forget when, as a newly-ordained curate, I was called to the deathbed of a very old lady in one of those dreadful ‘care homes’ She was suffering equally from dementia and neglect and the nurse told me that she couldn’t speak three words of sense together. At a loss as to how to pray I began to recite the 23rd psalm, in the Prayer Book version. Suddenly I became aware of a voice beside me, faint at first but growing stronger. It was the old woman joining in through laboured breath. I had a strong snse that the person speaking these words was not the wandered old lady but the little girl who had learnt them all those years ago. We made it to the end of the psalm together and she died peacefully as  I was saying the Gloria. ‘I will dwell in the house of the Lord forever’ were the last words on her lips.

But there is more than that, the last petiton is the deepest. The prayer that we should ‘inwardly digest’ the scriptures has roots in a profound and ancient way of reading, still preserved by the church in the name ‘Lectio Divina‘. You can see its earliest roots in Jesus words to Satan, themselves a quotation from Scripture: “Man does not live by bread alone but by every word that proceedeth out of the mouth of God”. We are to live on, and be sustained by scripture just as we live on and are sustained by bread, to take it in daily till it becomes transformed into part of the very substance of who we are, giving us new strength.

After the prologue, the first sonnet in my sequence Sounding the Seasons; seventy sonnets for the Christian year, is called The Lectern, and it is essentially a hymn to scripture written in response to this collect and what the collect reveals about reading scripture in church. Here it is. As usual you can hear it by clicking on the ‘play’ button or the title.

Some rise on eagles’ wings, this one is plain,
Plain English workmanship in solid oak.
Age gracefully it says, go with the grain.
You walk towards an always open book,
Open as every life to every light,
Open to shade and shadow, day and night,
The changeless witness of your changing pain.
Be still the Lectern says, stand here and read.
Here are your mysteries, your love and fear,
And, running through them all, the slender thread
Of God’s strange grace, red as these ribbons, red
As your own blood when reading reads you here
And pierces joint and marrow… So you stand,
The lectern still beneath your trembling hand. 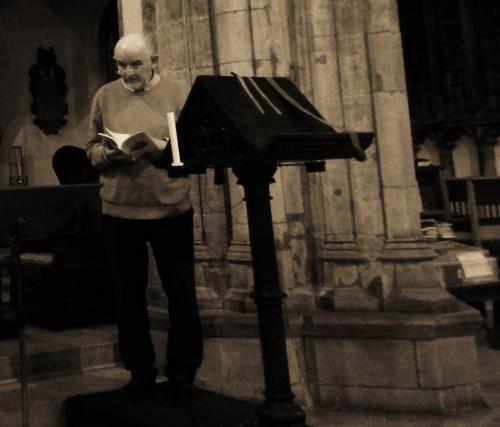