An interview about my new book with Lancia Smith

The Photographer and astute interviewer Lancia Smith has kindly marked my birthday today by publishing an interview about my new book Waiting on the Word. You can read the full interview from her Website Cultivating the True the Good and the Beautiful by clicking HERE. Readers of the book who are going to read the selected poem each day may like to know that Lancia will generously be providing an image for each poem each day and I will be providing a recording. Both image and recording will be posted on both our sites.

Meantime to give you a flavour here are two snippets from the fuller interview interspersed with one or two of Lancia’s own pictures, with which her site is so liberally adorned:

What is the tie in observing rituals and the seasons of our lives? Why does it matter?

AMG: Well, we can’t think of everything at once! We are creatures who were made to inhabit time, though we also carry eternity in our hearts, and to be in time is to experience one thing at a time, one moment at a time, to have to lose one moment in order to experience the next. The danger is that we lose not only the moment, but the meaning of the moment. We become so eager for the next thing that we abandon the rich legacy of all that we have already been given.

The aim of observing regular times and celebrations, shared with a wider Christian community, is to stem that loss, and even reverse that flow.

By setting these celebrations in time, giving them each a recurring day in the year we can get Time, who takes things way to be Time who restores them. Time the thief becomes Time the provider! 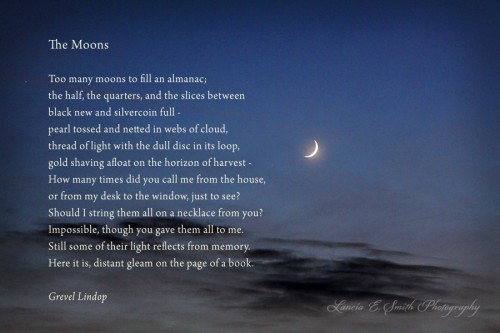 You have poets from a highly rich range of voices: men and women, people of faith and people not-yet-persuaded of faith, old poets and younger ones, black and white, widely known and some virtually never heard of, and a diverse range of styles from sonnets to free verse.  How did you choose which poems to use in this anthology and what are you using as the guiding principle in the order you placed them in the book?

AMG: Well, if I glance for a moment at my bookshelves, and perhaps if you glance at yours, or better still at the piles of opened books that are lying about sometimes on top of one another, I notice no apartheid, only a glad and free communion. On the desk in front of me Seamus Heaney happens to be leaning against Milton, the seventeenth century English protestant and the 20th century Catholic seem to be rubbing along fine, united by poetry. My Leonard Cohen, and my Dylan Thomas have somehow found themselves on either side of my George Herbert, and I can just imagine the conversation between these three poets, all haunted by a sense of the holy, all dogged by a melancholy undertow, all three of them wrestling with the heartbreaking alternations between ecstasy and routine. And if I turn from my outward and visible library to the bookshelves of my mind, where the books are not fixed but wander freely, where the pages and the very texts themselves are all alive and interleaved, where a line of Donne’s is suddenly harmonized with a line of Dylan’s, I find that magical things happen! I hope to make some of the same magic when I make an anthology like this. I know that academics have quartered and quarantined these poets into different categories, according to period, style, belief, world view etc. That has its place and purpose but it’s not what I’m doing here. In these anthologies I am not trying to impress the professors, I am breaking bread, sharing good things with my fellow pilgrims. Now because we are pilgrims, and there are staging posts along the way, special points in Advent to think about the antiphons, particular times in Epiphany to remember certain mysteries. I have ordered these poems to highlight those staging posts, but I have also tried to get some surprising conversations started, to put poems next to each other whose insights might highlight each other. For example I have put a poem of Donne’s and a poem of Scott Cairn’s next to each other, they are very different in period and style and yet both poets have something of the same heady mix of sensual attention, intellectual muscle, and rich spirituality.

But I also wanted a continuous thread of beauty, of something magical and numinous. Grevel’s poem, beautiful in itself, also speaks to the reader about looking out for beauty, threading beautiful glimpses together, which is very much what I hope will be happening in this anthology. 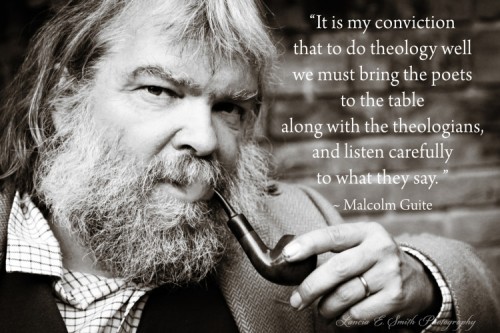