For the Feast of Christ The King 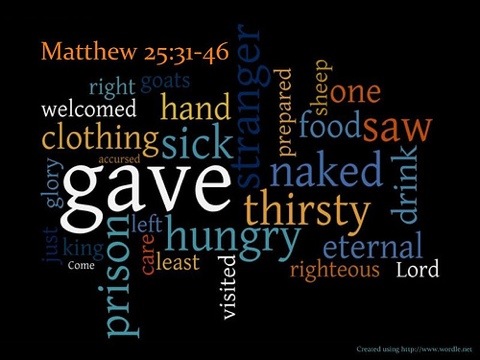 We come now to a feast of Ends and Beginnings! This Sunday is the last Sunday in the cycle of the Christian year, which ends with the feast of Christ the King, and next Sunday we begin our journey through time to eternity once more, with the first Sunday of Advent. We might expect the Feast of Christ the King to end the year with climactic images of Christ enthroned in Glory, seated high above all rule and authority, one before whom every knee shall bow, and of course those are powerful and important images, images of our humanity brought by him to the throne of the Heavens. But alongside such images we must also set the passage in Matthew (25:31-46) in which Christ reveals that even as He is enthroned in Glory, the King who comes to judge at the end of the ages, he is also the hidden King, hidden beneath the rags and even in the flesh of his poor here on earth.

This passage in Matthew is especially challenging to us now in the midst of a major refugee crisis triggered by the dreadful violence in Syria and Iraq. We can and should make a compassionate response, even though that response is shadowed by our fears of terrorist infiltration. It should be possible to be alert to and vet those malicious persons who might try to infiltrate themselves amongst genuine refugees. But it is clear that the huge numbers of widows and children in desperate need are no threat to anyone, but rather themselves threatened by the terrorists whom we oppose. There is no reason for a proper caution about infiltration to inhibit a genuine and generous response to crisis.I wrote this sonnet some years before the present Crisis, but Christ’s words, on which this poem reflects, seem more vital and more needed than ever.

Here is a sonnet written in response to the gospel reading for the feast of Christ the King.

This sonnet comes at the end of my sequence ‘Sounding the Seasons’ published by Canterbury Press.

The book is available in North america from Steve Bell here, or Amazon here

Our King is calling from the hungry furrows
Whilst we are cruising through the aisles of plenty,
Our hoardings screen us from the man of sorrows,
Our soundtracks drown his murmur: ‘I am thirsty’.
He stands in line to sign in as a stranger
And seek a welcome from the world he made,
We see him only as a threat, a danger,
He asks for clothes, we strip-search him instead.
And if he should fall sick then we take care
That he does not infect our private health,
We lock him in the prisons of our fear
Lest he unlock the prison of our wealth.
But still on Sunday we shall stand and sing
The praises of our hidden Lord and King.