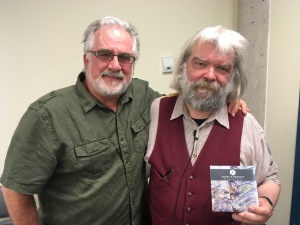 With Roy Salmond and the new CD!

I ought to begin this post by apologising for the strange little missive of indiscriminate gobbledygook which some of you may have glimpsed on these pages and even received in your emails. This was neither a rash experiment in free verse, nor, as some surmised, a bad translation of Welsh, but was in fact the free and random creation of the phone in my pocket! The mischievous little device not only switched itself on but also opened my wordpress app and managed to post its randomness to the world at large – perhaps my phone will in the end be due for its own literary prize!

But to return to something more deliberate, here is the second instalment of my North American Adventures. After my teaching stint at Regent and my joint reading with Luci Shaw my wife Maggie came out and joined me for 10 days holiday up in the mountains at Whistler where a kind friend had generously lent us his holiday house. Whistler is most famous as a ski resort and the scene of the Winter Olympics but it is also delightful in the summertime and home to a thriving colony of black bears some of whom we were fortunate to see whilst we were there. We hiked on trails, went wilderness canoing and took the impressive ‘gondola’ ride up to the top of whistler mountain and had a lovely walk up on the snowy heights.

I wrote no poetry whilst I was there, in a sense I felt the mountains were already doing it for me, but I took in great store of beautiful images which I hope will impress themselves into verse at some time in the future. I took occasion whilst I was up there to stand on the winter olympics podium and reinstate poetry as an olympic sport!

Another hi-light of this BC sojourn was meeting again with Roy Salmond the producer of my new CD ‘Songs and Sonnets’, which I know a number of you have kindly helped on its way through a crowdfunding page. and Behold! Roy had the CD fresh in his hand when we met. So it is in the world at last and there will be a more formal launch next month about which I will write in due course. I’m very happy with the result. Here is one of the poems I recorded for the CD ,which also contains songs and poems set to music:

I turn a certain key within its wards,

Unlock my doors and set them open wide

To entertain a company of words.

Whilst some come early and with eager stride

Others must be enticed and coaxed a little,

The shy and rare, unused to company,

Who’ll need some time to feel at home and settle.

I bid them welcome all, I make them free

Of all that’s mine, and they are good to me,

I set them in the order they like best

And listen for their wisdom, try to learn

As each unfolds the other’s mystery.

And though we know each word is my free guest,

They sometimes leave a poem in return.

With the indefatigable and ever-generous Jerry Root!

Then, when the holiday was over we drove down to the States and took the ferry to Orcas Island where I spent a happy few days at the Kindlingsfest, speaking about the notion of Sabbath and rest and meeting with old friends. Amongst these was Jerry Root who had brought me the gift of an American College Football T-shirt bearing the legend ‘Fear the Poet’! This is a genuine football supporters’ shirt, apparently the emblem of the Whittier College football team is the poet after whom the college is named

Then began the next part of the adventure, a flight to Alberquerque and a wonderful week in Santa Fe and the chance to meet one of my favourite bands of all time: Over The Rhine! more about that in the next post.