Michaelmas; a sonnet for St. Michael the Archangel 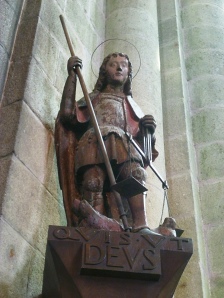 Continuing my sequence from Sounding the Seasons, the collection of my sonnets for the church year, published by Canterbury Press, the 29th September brings us the feast of St. Michael and All Angels which is known as Michaelmas in England, and this first autumn term in many schools and universities is still called the Michaelmas term. The Archangel Michael is traditionally thought of as the Captain of the Heavenly Host, and, following an image from the book of Revelation, is often shown standing on a dragon, an image of Satan subdued and bound by the strength of Heaven. He is also shown with a drawn sword, or a spear and a pair of scales or balances, for he represents, truth, discernment, the light and energy of intellect, to cut through tangles and confusion, to set us free to discern and choose. He is celebrated and revered in all three Monotheistic religions. There is a good, full account of him here. And here is a bright and playful image of him by the Cambridge Artist Rebecca Merry, who has done a number of icons and other images of the Archangels. You can see more of her art here, and also in the Byard Art Gallery.

And Michael’s scale is true, his blade is bright

And here is a response to the poem from photographer Margot Krebs Neale, weaving the words at the heart of the poem into the heart-shaped image. More of Margot’s work can be seen here. 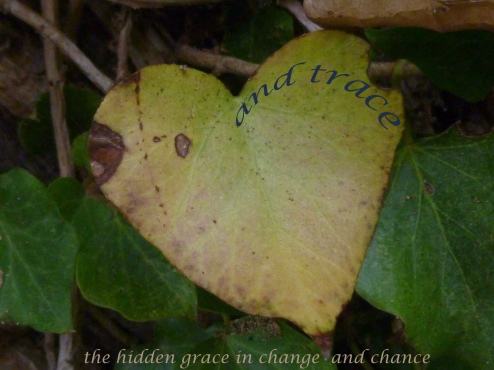 This poem also appears as the epigraph in the new edition of Holly Ordway’s excellent book ‘Not God’s Type’ which I highly recommend. As always you can hear the poem by clicking on the ‘play’ button if it appears, or the title. Many of you have commented on how good it is to be able to hear the poems, and I’m glad thats working.

And Michael’s scale is true, his blade is bright.

He strips dead leaves; and leaves the living clear

To flourish in the touch and reach of light.

Upon this turning world with you and dance

In the Great Dance. Draw near, help me discern,

And trace the hidden grace in change and chance.

Drive through the deep until the steep waves part,

And pierce the clotted darkness in my heart.

Unchain the child you find there, break the spell

And overthrow the tyrannies of Hell.

2 responses to “Michaelmas; a sonnet for St. Michael the Archangel”