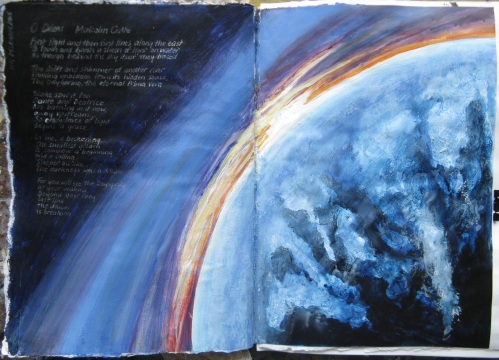 The fifth ‘great ‘O’ antiphon in my Advent Anthology from Canterbury Press Waiting on the Word calls on Christ as the ‘Oriens’, the Morning Star, the Dayspring, and it comes as an answer to the sense of darkness and captivity in the fourth antiphon, O Clavis‘ I find the idea of Christ as rising light in the East very moving, for he is Alpha, the ‘Beginning’. The Translation which gives ‘Dayspring’ for Oriens I especially love, both because ‘Dayspring’ suggests at one and the same time, both light and water, two primal goods in life which I love in combination, especially light reflected on water, and also because ‘Dayspring’ was the name of a ship my great grandfather built for Scottish missionaries and also the name of the little gaff cutter, from whose deck I saw the dawn rise after a long period of darkness. Many of these senses of ‘Dayspring’ are at play in the sonnet I have given below. I should also mention that the line from Dante means “I saw light in the form of a river’ another touchstone moment for me in the Paradiso You can hear me read this poem by clicking on the title or the play button. The image above was created by Linda Richardson. She writes:

How often do you hear the word ‘Dayspring’ used in common parlance? It is such a beautiful word meaning ‘dawn’. Here it is in Luke 1:76-79: ‘And thou, child, shalt be called the prophet of the Highest: for thou shalt go before the face of the Lord to prepare his ways… whereby the dayspring from on high hath visited us, To give light to them that sit in darkness and in the shadow of death, to guide our feet into the way of peace.’ (King James Version)

I laboured over this small painting using acrylic paint, ink and watercolour to try to get that ephemeral light that only a very few astronauts have ever seen with their own eyes. The great blue Earth turns away from the darkness of the void and is lit by the Sun, the archetype of God, and Malcolm’s poem is so full of expectant joy and peace – ‘the darkness was a dream’. Pierre Teilhard de Chardin says, ‘ We are not human beings having a spiritual experience; we are spiritual beings having a human experience’.

You can find you can find a short reflective essay on this poem in Waiting on the Word, which is now also available on Kindle

I am also glad that Jac Redford has given me permission to share his beautiful setting of this poem:

O Dayspring,
splendour of light eternal and sun of righteousness:
Come and enlighten those who dwell in darkness and the shadow of death.

The shift and shimmer of another river
Flowing unbidden from its hidden source;
The Day-Spring, the eternal Prima Vera.

Blake saw it too. Dante and Beatrice
Are bathing in it now, away upstream…
So every trace of light begins a grace

In me, a beckoning. The smallest gleam
Is somehow a beginning and a calling;
“Sleeper awake, the darkness was a dream

For you will see the Dayspring at your waking,
Beyond your long last line the dawn is breaking”.