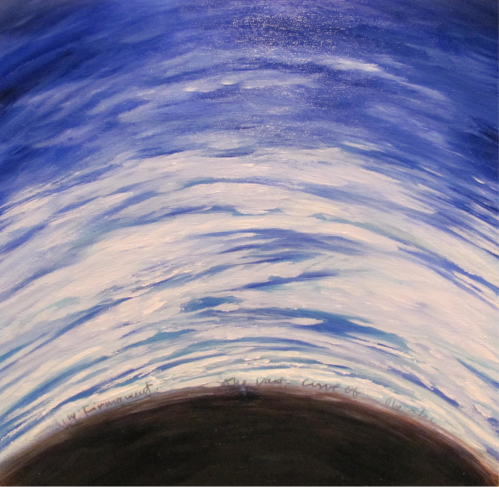 The firmament, the vast curve of the sky

Monday brings the second day in my sequence of roundels celebrating and responding to Genesis Chapter One. As before I give you first the verses of Genesis then the roundel in response, and as before you can hear the poem by clicking on the ‘play’ button or on the Roman numeral which forms its title.

The Canadian artist Faye Hall has made a beautiful sequence of 63 paintings responding to my Seven Whole Days Sequence and we have published it as a book, which you can purchase from her web site here  or, in the uk from Amazon Here.  Faye has kindly allowed ne to include with each poem one or two of the paintings from the book, to give you a taste of it, and you can see these paintings for yourself at the MHC Gallery in Winnipeg from 16th March to 5th of May. I will be at the gallery on 15th April for a special book signing and launch event, full details here

These poems were originally published in ‘Parable and Paradox’   Canterbury Press in the summer of 2016.

6 And God said, Let there be a firmament in the midst of the waters, and let it divide the waters from the waters.

8 And God called the firmament Heaven. And the evening and the morning were the second day.

The firmament, the vast curve of the sky

The breath and weave of every element

Your Love has pitched the heavens like a tent

And delved the depth where hidden treasures lie,

From whose rich womb our life has its ascent.

Out of those depths I hear my spirit cry

As height and depth give praise with one assent

To that great form that orders low and high;

Your Love has pitched the Heavens like a tent