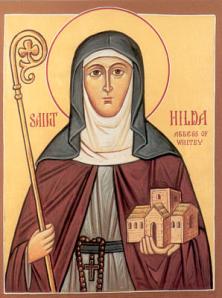 The 19th of November is the feast day of Abess Hilda of Whitby, and I am posting this poem in her honour a couple of days early so that those who wish to copy or use it in services or for personal prayer on the day can do so. Saint Hilda was great leader of the Church in England and the first patron of English Christian poetry. She also presided at the crucial and controversial Synod of Whitby and brought that Synod to a fruitful and peaceful conclusion. When I posted this sonnet on her feast day some years ago it happened that the church’s General Synod was meeting and I had that in mind as part of my prayerful remembrance of Hilda, as you will hear in the preamble to the recording of the poem.

This year its another aspect of her story I’d like to highlight, to which I also allude in my poem. This is the story of Caedmon, the earliest English poet whose name is known. Bede tells the story of how he came to his vocation as a poet:

According to Bede, Cædmon was a lay brother who cared for the animals at the monastery Streonæshalch (now known as Whitby Abbey). One evening, while the monks were feasting, singing, and playing a harp, Cædmon left early to sleep with the animals because he knew no songs. The impression clearly given by St. Bede is that he lacked the knowledge of how to compose the lyrics to songs. While asleep, he had a dream in which “someone” (quidam) approached him and asked him to sing principium creaturarum, “the beginning of created things.” After first refusing to sing, Cædmon subsequently produced a short eulogistic poem praising God, the Creator of heaven and earth.

Upon awakening the next morning, Cædmon remembered everything he had sung and added additional lines to his poem. He told his foreman about his dream and gift and was taken immediately to see the abbess. The abbess and her counsellors asked Cædmon about his vision and, satisfied that it was a gift from God, gave him a new commission, this time for a poem based on “a passage of sacred history or doctrine”, (account taken from this Wiki article )

So as I remember Hilda with thanksgiving I also give thanks for all the churches and church leaders who have been patrons of the arts and especially those who have found a space and place for poetry in liturgy. I give thanks too for all those churches who have chosen to weave my own poems into liturgy and sermons and pray that those words have been fruitful

The icon of Hilda above is from the St. Albans Parish website The Daily Cup

The sonnet also appears in my second poetry book with Canterbury Press, The Singing Bowl

Called to a conflict and a clash of cultures,

Where insults flew whilst synod was in session,

A woman’s wisdom, deftness and discretion.

You made a space and place for poetry

When outcast Caedmon, crouching in the byre,

Was called by grace into community

Your strong recourse to reconciliation,

Your exercise of true imagination.

Pray for our synods now, princess of peace,

That every fettered gift may find release.

11 responses to “Hilda and Caedmon”