The KJV; Nostalgia or New Life?

All year we have been Celebrating the KJV here in Cambridge and I have given a number of sermons and written a number of blog posts and articles on the specifics of the translation. However as the year has continued I have had a gradual sense of unease about the way it is being celebrated, at least here in England. It seems to be touted more and more as a cultural artefact, a piece of marketable heritage, a source book of common phrases, a decorative back ground to literature, but never as sacred, challenging, or life-changing. The whole year seems to have been about manner not matter, about style not substance, as though we could honour and praise a book without ever considering its actual content!  Finally I decided that I wanted to say something publicly about this misgiving, and to outline, by way of contrast, what the original translators were working to achieve, and I have done so in the sermon I post below. The core of what I have to say is an exposition of four beautiful images from Miles Smith’s prefaratory letter in which he set out very clearly what the translators of the KJV thought their translation was for. So I give that passage from the Preface here, followed by the audio of my sermon, you can either click on the ‘play’ button if it appears in your browser, or on the link in the title of the sermon. The audio lasts for 25 minutes.

“Translation it is that openeth the window, to let in the light; that breaketh the shell, that we may eat the kernel; that putteth aside the curtain, that we may look into the most Holy place; that removeth the cover of the well, that we may come by the water, even as Jacob rolled away the stone from the mouth of the well, by which means the flocks of Laban were watered [Gen 29:10]. Indeed without translation into the vulgar tongue, the unlearned are but like children at Jacob’s well (which is deep) [John 4:11] without a bucket or something to draw with; or as that person mentioned by Isaiah, to whom when a sealed book was delivered, with this motion, “Read this, I pray thee,” he was fain to make his answer “I cannot for it is sealed”

What a miracle that you should be reading this! The everyday miracle that we call ‘reading’, a miracle of interpretation, of leaps from shapes on paper, to unsounded sounds in the mind, leaps from sounds to meaning, and from common meaning to a communion of minds! We take it all for granted, we scarcely notice what we are doing, but sometimes we should pause and reflect what an extraordinary achievement literacy is, and how privileged we are to be able to do it.

In my first post of the year I mentioned that we had cause to celebrate the anniversary of the King James Version, and literacy itself is one the many good fruits of that perpetually fruitful book. The KJV clarified, dignified, and replenished the English language, but it was also the prime motivator for a spread of literacy. Countless local schools, philanthropic trusts, and bible societies sprung up in the wake of this translation with the prime aim of teaching literacy to ordinary people so that they could take the Bible up in their own hands, and draw from the deep well of the scriptures for themselves. The great revivals in our history since then, the evangelical revival for example and the rise of Methodism led to an explosion in demand for Bibles and for the skill of reading them. Then those people, many of them adults, who first learned to read so as to read God’s word, went on to read and write more widely and to create that culture shift whereby we now see literacy as a birthright that should be extended to all, not , as it once was, the preserve of an elite. Even in our own age the desire to share, to make the Bible available in many new languages and in many remote places is also the driving force for literacy campaigns that bring with them so many other benefits for human development and wellbeing.

But even as we pause in the act of reading this text and give thanks for the gift of literacy and those whose time and effort gave us that gift, thanks for all the truth and pleasure we have found in reading and writing, we might ask: ‘Is there another, and deeper literacy we have yet to acquire?’ As children we learned that each of the outer shapes, made of ink on paper that we call ‘letters’ was more than just a shape, but that they made sounds which in turn made words, words that carried a meaning , a meaning meant for us and sent to us by the one who wrote them. And so we learned to Spell. Perhaps the time is coming when we will learn that the world itself is full of shapes and sounds that also have a meaning, when science will move on from learning and describing the outer shapes of nature, like a child learning the letters of an alphabet, and become a more holistic and spiritual science by putting the letters together and starting to spell out slowly  the deeper truths God wants to teach us, written for us in his works as well as in his word. As George Herbert put it, reflecting alike on the twin mysteries of the scriptures and the world around us:

‘Thy Word is all, if we could spell‘

Next time, a poem of mine reflecting on these themes; “Summon the Summoners, a Good Spell”

2011 and the Gift of Translation 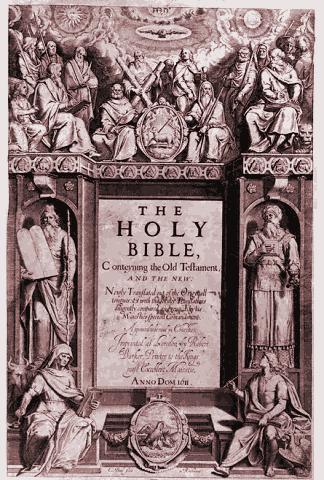 This year brings us to a great anniversary, which will have special significance for St Edwards, the church I serve in Cambridge. 2011 marks the 400th anniversary of the publication of the King James Version of the Bible, and two members of the team who made this great translation were members of St Edwards. But our connection goes deeper, for it was at St Edwards, three generations earlier, that people like Bilney, Barnes and Latimer, our three Martyrs, had grasped that the gospel needed translating in the deepest sense, not simply translating out of one language into another, but translating out of paper, and out of ritual, out of the past, translating into people’s lives in the here and now.

Indeed I believe that the very process of Translation goes to the heart  of the Chrsitian Faith, because for Christians the Word of God has already made the greatest translation of all, the translation we have just celebrated at Christmas! The eternal Word, whom we could never have known or even apprehended, has translated Himself into our flesh and blood, translated eternity into time, and translated Love into action. For Christ’s followers the sayings of Jesus, the stories of His life enshrined in the scripture, only have their meaning when they are translated into the realities of everyday life, into ordinary conversation and action.

This perpetual and self-renewing translation has always been part of the life and work of St Edwards, and it has always been controversial! F D Maurice, for example, was pilloried for translating the gospel into social action, inclusion of women, education for the poor, and for moving away from the punitive and judgemental mindset that infected the church of his day, but in St Edwards he found a place where he could flourish and a community that would support his work. So, even as we celebrate a great treasure from the past and think of all the good that has come from 400 years of the KJV, we will be looking ahead to the future and seeing how to continue St Edwards historic mission to be a place where an ancient faith gives rise to new understandings and fresh expressions.

So during the course of this year I shall be posting to these pages some reflections on passages in the KJV whose language and phrasing I have found especially helpful but I will also be posting some more general reflections on translation itself, the translation and re-translation of secular as well as sacred texts. I will post some of my own translations of   other people’s poetry  and also some comments on the translations that have been made of my poems and other writings into different languages. To read what you have written when it is translated into a new language can sometimes be a very enlightening experience. Indeed the poet John Donne believed our own transition from earth to Heaven will be, thanks to Jesus Christ, a kind of translation. I’ll leave the last words of this post with him:

‘All mankind is of one author, and is one volume; when one man dies, one chapter is not torn out of the book, but translated into a better language; and every chapter must be so translated; God employs several translators; some pieces are translated by age, some by sickness, some by war, some by justice; but God’s hand is in every translation, and his hand shall bind up all our scattered leaves again for that library where every book shall lie open to one another.’ (John Donne Meditation 17)