The House of Christmas GK Chesterton 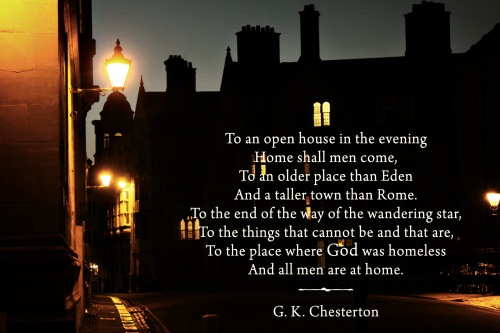 The sequence of my selection of poems for Advent, Waiting on the Word, resumes on the 1st December, but on this last day of November, a little pause between Advent Sunday and December the 1st, I am prompted by a lovely image from Lancia Smith, which Draws on GK Chesterton’s poem, The House of Christmas, a poem which contemplates the way that God made himself homeless that we might at last come home, to record that poem for you here, though it is not in the anthology. As always you can hear it by either clicking on the title or the ‘play’ button.

The House of Christmas

There fared a mother driven forth
Out of an inn to roam;
In the place where she was homeless
All men are at home.
The crazy stable close at hand,
With shaking timber and shifting sand,
Grew a stronger thing to abide and stand
Than the square stones of Rome.

For men are homesick in their homes,
And strangers under the sun,
And they lay on their heads in a foreign land
Whenever the day is done.
Here we have battle and blazing eyes,
And chance and honour and high surprise,
But our homes are under miraculous skies
Where the yule tale was begun.

A Child in a foul stable,
Where the beasts feed and foam;
Only where He was homeless
Are you and I at home;
We have hands that fashion and heads that know,
But our hearts we lost – how long ago!
In a place no chart nor ship can show
Under the sky’s dome.

This world is wild as an old wives’ tale,
And strange the plain things are,
The earth is enough and the air is enough
For our wonder and our war;
But our rest is as far as the fire-drake swings
And our peace is put in impossible things
Where clashed and thundered unthinkable wings
Round an incredible star.

To an open house in the evening
Home shall men come,
To an older place than Eden
And a taller town than Rome.
To the end of the way of the wandering star,
To the things that cannot be and that are,
To the place where God was homeless
And all men are at home.

4 responses to “The House of Christmas GK Chesterton”